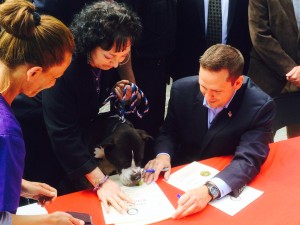 Orange County, NY Legislator Mike Anagnostakis (R-Montgomery, Newburgh) was elated when law he had proposed─Rocky’s Law─was voted unanimously and thereby approved by Orange County, NY Legislators. Pursuant to Rocky’s Law, Orange County Residents convicted of abusing animals are required to register within five days of being convicted or released from jail or prison. Failure to register may result in a fine of up to $2,000 and a year in jail. First time offenders will be prohibited from owning a companion animal for 15 years, and repeat offenders will be barred from owning a companion animal for the rest of their life.

Rocky’s Law was named after a 3-year old Staffordshire Terrier named Rocky who had to be euthanized after he sustained life-threatening injuries from being left in freezing temperatures for five weeks while his owner went on a vacation.

Legislator Mike Anagnostakis had proposed the law so that Rocky’s death “will not have been in vain. It will at least stop those who have committed the most heinous crimes from ever getting their hands on our loved ones again. What a tribute to Rocky it would be if this law becomes enacted across the U.S.”

Posted in Legal News, Uncategorized | Comments Off on Rocky’s Law

Most Recent Execution by Capital Punishment 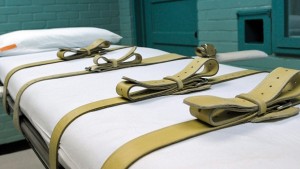 Kelly Gissendaner was executed on Wednesday at 7pm, with respect to her sentence of the death penalty for engineering the murder of her husband in 1997, despite both her children and even Pope Carlo Francis’ wishes. After visiting the United States, the pope sincerely requested in writing that the state of Georgia not follow through with the execution of Ms. Gissendander as stated below:

“While not wishing to minimize the gravity of the crime for which Ms. Gissendander has been convicted, and while sympathizing with the victims, I nonetheless implore you, in consideration of the reasons that have been expressed to your board, to commute the sentence to one that would better express both justice and mercy,”

None of the last minute pleas were enough, and as a result, Ms. Gissendaner was the first person in 70 years to be executed by the death penalty in Georgia.

The death penalty has been part of North Carolina Law since the state was a British colony, and at that time available as punishment for an array of crimes. Until the later part of the 20th century, the death penalty was permissible for crimes such as arson, burglary, rape, and murder. Since then, however, NC has limited the crimes eligible for capital punishment to cases only where another person is killed.

There has been a drop in the number of capital trials, death penalties, and executions in North Carolina in recent years. The last person to be executed on death row in North Carolina was Samuel Flippen, who was put to death on August 18, 2006 for the murder of his two-year-old stepdaughter.

The laws regarding North Carolina’s death row policies and procedures are constantly changing, as this is an extremely controversial topic in government. In 2001, according to N.C.G.S. § 15A-2004, the General Assembly modified the statute to give prosecutors the option to decline seeking the death penalty. Those exempt from capital punishment are those who “suffer from a severe mental disorder or disability that significantly impaired his or her capacity to appreciate the nature, consequences, or wrongfulness of his or her conduct.” The minimum age for execution is 17.

Just this week, State Representative Jon Hardister (R) of Greensboro said he thinks the death penalty should be abolished because he doesn’t “trust the government to do it right.” He suggests that alternatively, NC should sentence to life in prison without parole. What are your thoughts on NC laws regarding capital punishment?

Posted in Legal News, Legal Process, Uncategorized | Comments Off on Most Recent Execution by Capital Punishment