Holiday Season – Booze It & Lose It 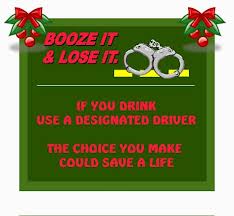 The holiday season is in full swing and so is the North Carolina “Booze It & Lose It” Campaign, created by State Transportation Secretary Gene Conti in an effort to remove impaired drivers from the road and keep our citizens safe. Checkpoints and increased patrol began on December 6th and will continue through January 2, 2013, to help reduce the rising number of alcohol related crashes, injuries and fatalities state wide.

Driving while under the influence is a violation of North Carolina General Statute § 20-138.1

N.C.G.S. § 20-138.1.  Impaired driving.
(a)        Offense. – A person commits the offense of impaired driving if he drives any vehicle upon any highway, any street, or any public vehicular area within this State:
(1)        While under the influence of an impairing substance; or
(2)        After having consumed sufficient alcohol that he has, at any relevant time after the driving, an alcohol concentration of 0.08 or more. The results of a chemical analysis shall be deemed sufficient evidence to prove a person’s alcohol concentration; or
(3)        With any amount of a Schedule I controlled substance, as listed in G.S. 90-89, or its metabolites in his blood or urine.
(a1)      A person who has submitted to a chemical analysis of a blood sample, pursuant to G.S. 20-139.1(d), may use the result in rebuttal as evidence that the person did not have, at a relevant time after driving, an alcohol concentration of 0.08 or more.

Last year, 3,600 North Carolina Drivers were charged with DUI / DWI during the month long holiday campaign and that number is expected to increase this year. Not only does drinking and driving put you at risk of getting arrested at a checkpoint or during a traffic stop, it puts your life and the lives of others in danger.  In fact, drunk drivers with a blood alcohol concentration (BAC) of 0.08, the legal limit, are 11 times more likely than a sober driver to be in a motor vehicle accident. This likelihood increases with the increase of the BAC level.  With odds like that, why risk it?

In 2011, there were more than 950 alcohol related crashes in North Carolina during the “Booze It & Lose It” Campaign spanning from December 3rd – January 3rd. Those 950 crashes resulted in 44 fatalities and 702 injuries- some of which were innocent victims and not the drunk driver themselves.

If you find yourself questioning weather you had too much eggnog at your office holiday party, don’t risk getting arrested or worse, endangering your life or the lives of others. Play it safe and call a cab or have a sober friend take you home.  If you or someone you know have any legal needs this holiday season call Collins Law Firm at (910) 793- 9000 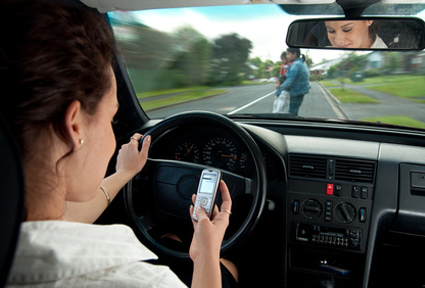 Over the past twenty years, cell phones have become an essential part of day to day life for many Americans. Cell phones continue to provide us with the convenience to communicate while on the go, comfort in knowing we have a way to call for help in case of an emergency, and access to music, games and entertainment.  Cell phones can make life easier, but when used irresponsibly, can have disastrous consequences.

Answering a text takes away your attention for about five second. That is enough time to travel the length of a football field. We know it is dangerous, but many of us continue to send or receive text messages while driving thinking that nothing will happen to them. But according to the National Highway Traffic Safety Administration, text messaging while driving makes a car crash 23 times more likely and 1.3 million auto collisions involved cell phones last year.

N.C.G.S. §20-137.4A Unlawful use of mobile telephone for text messaging or electronic mail
(a) Offense. – It shall be unlawful for any person to operate a vehicle on a public street or highway or public vehicular area while using a mobile telephone to:
(1) Manually enter multiple letters or text in the device as a means of communicating with another person; or
(2) Read any electronic mail or text message transmitted to the device or stored within the device, provided that this prohibition shall not apply to any name or number stored in the device nor to any caller identification information.
(b) Exceptions. – The provisions of this section shall not apply to:
(1) The operator of a vehicle that is lawfully parked or stopped.
(2) Any of the following while in the performance of their official duties: a law enforcement officer; a member of a fire department; or the operator of a public or private ambulance.
(3) The use of factory-installed or aftermarket global positioning systems (GPS) or wireless communications devices used to transmit or receive data as part of a digital dispatch system.
(4) The use of voice operated technology.
(c) Penalty. – A violation of this section while operating a school bus, as defined in G.S. 20-137.4(a)(4), shall be a Class 2 misdemeanor and shall be punishable by a fine of not less than one hundred dollars ($100.00). Any other violation of this section shall be an infraction and shall be punishable by a fine of one hundred dollars ($100.00) and the costs of court.

Posted in Criminal Defense, DWI/Traffic, Legal Advice | Comments Off on Texting While Driving