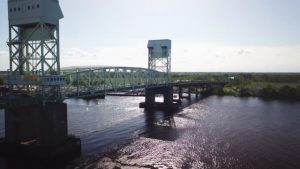 The planning and design for the Cape Fear Crossing Project has been postponed indefinitely, as of August 13, 2019.

The draft of the State Transportation Improvement Plan (STIP) was released this month, which revealed that the Cape Fear Crossing did not score high enough on the plan to receive sufficient funds to continue moving forward with planning and design.

One deadline to pick a preferred roadway (out of six) set for June of this year was pushed back initially, because of the volume of input at a public hearing held in April of this year, where about 650 people attended at North Brunswick High School to voice their opinions on the new bridge.

To be reconsidered for funding in the future, the project will need to be submitted by the Wilmington Urban Area Metropolitan Planning Organization.  The NCDOT will be releasing the next draft STIP in February 2022.  However, even if the project gets reentered by then, work would not actually begin until 2032 or even later.

When travelling back and forth between Brunswick and New Hanover Counties, be aware of other drivers, as well as construction hazards and emergency vehicles.  Pay attention, abide by the NC laws, and stay safe, especially as we head into this next school season.

However, should you or someone you know get injured in an accident, or receive a citation for a traffic violation in Southeastern North Carolina, in or around Wilmington, NC, in New Hanover County, Brunswick County, or Pender County, contact Collins Law Firm at 910-793-9000 for a confidential consultation.

This entry was posted on Wednesday, August 14th, 2019 at 9:18 pm and is filed under News. You can follow any responses to this entry through the RSS 2.0 feed. Both comments and pings are currently closed.