The American Flag at ILM 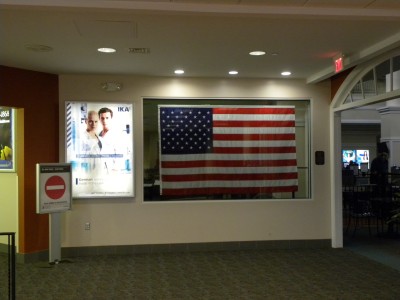 When you get to the Wilmington International Airport, you will notice a huge display of an American flag in the welcoming area.

Next to the flag is a plaque, which reads as follows:

**Operation Noble Eagle**
American Flag Flown At the
Pentagon Crash Site
Washington, DC
September 13-22, 2001
Donated By
The Wilmington Rotary Club
To Honor the Service of
The Salvation Army To The
Victims of The September 11 Tragedy
As Well As Its Continued Service To
The Citizens of New Hanover County.
May The Display of This Flag At ILM
Serve As A Constant Reminder of That
Tragic Day And The Effect It Has Had
And Will Continue To Have On
Each And Every American.
“SERVICE ABOVE SELF”

The Salvation Army leader, Major Robert Vincent, and several from the local organization in Wilmington went to Washington, DC to assist with recovery operations at the Pentagon.  While they were there, they flew several flags over the site.  The lead volunteer brought the flag back to Wilmington as gift to the residents and volunteers who helped with post 9/11 recovery.

The Salvation Army Leader was a member of the Downtown Rotary Club.  In discussion with several Rotarians, they tried to think of a place in Wilmington where the flag could be displayed and have a symbolic message. One Rotarian, Ron Gumm, suggested the airport near the security check point.  Ron was also a part-time employee at ILM for coordinating Air Shows and other Special Events.

I was the Facility Director at ILM, and in 2001-2002 we were planning a renovation of the airport terminal.  We decided to have a case designed in the project to hold the flag for all to see as they go through security.  It is a perfect backdrop to the process, and it has significant meaning because the events of 9/11 changed airport security and created the TSA.  Our renovation finished in May 2004 and the flag was part of the Grand Opening ceremony.  Also, the Downtown Rotary Club presented the plaque for the flag.

Major Richard Watts, Commanding Officer for the Salvation Army of Wilmington, NC, provided more insight about the role of the Salvation Army during the 9/11 after mess. Major Watts himself was the Commanding Officer of the Salvation Army of Columbia, SC at that time and was assigned to serve the Pentagon crash site where he arrived in the evening of September 12, 2001. However, because this site was not just a disaster, but a crime scene, and because the Pentagon is our federal defense headquarters, Major Watts had to undergo a FBI clearance which lasted for five hours. Further, the site was secured by two fences and before entering the secured area, at first one had to undergo two searches, later on four searches including one by canines. While the Salvation Army mainly provides food and emotional and spiritual support for families and friends of disaster victims, they also provided America flags to cover the coffins of the victims. Major Watts also reported that American flag were flown throughout the Pentagon, along the fences and hallways. However, due to the site being a crime scene, no one was allowed to take pictures. Major Watts witnessed and incident where a FBI agent confronted a man who took pictures regardless, through him to the ground and confiscated the footage.

The display of the flag has a great meaning especially to everyone who served during the 9/11 after mess as well as our service men and women who come through Wilmington International Airport.

Anthony D’Erasmo, Public Safety Officer at Wilmington International Airport, is a retired New York City Police Officer and he was one of the first responders to the World Trade Center, said that having the flag displayed in the welcoming area of the airport is a reminder of the event of 9/11 and a sign of appreciation of those who served and those who serve our country.

This entry was posted on Thursday, May 8th, 2014 at 3:26 pm and is filed under Auto Accidents, History. You can follow any responses to this entry through the RSS 2.0 feed. Both comments and pings are currently closed.