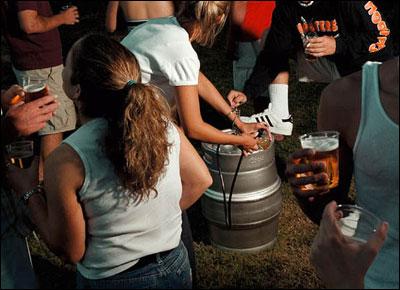 The paper reported that the New Hanover County ABC Board and the District Attorney’s Office may be teaming up once again to help reduce underage drinking in the area.  The areas include Wilmington, Wrightsville Beach, Carolina Beach, Kure Beach, and all other areas in New Hanover County, and possibly Pender County.

The paper reported that the Fifth Prosecutorial District’s top prosecutor, Ben David, asked the local ABC Board for assistance in developing a uniform way to enforce and punish cases involving underage drinking and related offenses.

Earlier this month, Ben David asked the board for a grant of $106,000 to fund a program comprised of two full-time positions – an assistant district attorney dedicated to prosecuting alcohol cases and a victim-witness coordinator for the specialized prosecutor.

According to the Star News, Ben David indicated that his focus with the program is on education for first-time offenders, and that underage drinking often leads to other crimes and that by reaching out to teenagers and others under the age of twenty one years of age, they can improve prevention of future problems.

The Star News indicated that the new project might have hurdles to overcome around before it can be implemented.  The paper reported that Tom Wolfe (who serves on the ABC Board and also is a county commissioner) said “conceptually it looks great [if] we could work something out to help kids realize the seriousness of underage drinking,” but that Wolfe said the local board still had to discuss the proposed program with state ABC Commissioners to make ensure it met the required guidelines before it could be approved.  It was reported that if finally approved, the program would start in October 2013 and be implemented through August 2014.

Southeastern North Carolina is known as an area which is popular for young people to attend College and pursue careers.  Naturally young people enjoy to play and party around our  beaches and downtown areas which provide various opportunities in which they may get charged with crimes. Many young people under the age of twenty one years old (the minimum age to legally purchase and consume alcoholic beverages) either purchase or create fake IDs online or use friends’ IDs who are of age to purchase alcohol.

Convictions of using fake IDs have serious consequences. The conviction of possession of a false identification or a fake ID alone often results in prosecution therefor. The original owner of the ID may face criminal liability as well.  If convicted of an offense involving a fake ID, N.C.G.S.§ 20-16(a)(6) provides that, one faces a mandatory suspension of their license by the Division of Motor Vehicles. In many cases, reinstatement of one’s license or the issuance of a limited driving privilege or hardship license before the end of the mandatory suspension is not possible.  However, in many cases, avoiding a conviction is possible.

This entry was posted on Monday, July 1st, 2013 at 8:32 am and is filed under Legal Advice, News. You can follow any responses to this entry through the RSS 2.0 feed. Both comments and pings are currently closed.