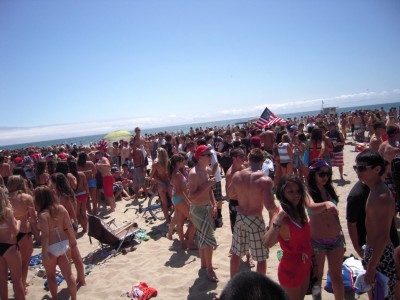 The Wilmington Star News recently reported that there are additional precautions in place for this year’s annual Fourth of July bash on Masonboro Island which will be focused on public safety. However, Richard Johnson founder of Masonboro.org, which is a volunteer organization dedicated to protect public access to the island, says as conservationists their group has solved the problem of leftover trash – by assuming responsibility for removing it.  Mr. Johnson said that the “amount of trash we picked up two years ago was 2,500 pounds. Last year, it was 4,000. . . . I don’t like it, but if the party is going to be there and the trash is going to be left behind, Masonboro.org is going to be there to clean it up.”

Trash and beer cans left on the island is the most visible remnant of the party, according to the Wilmington Star News (the Star News).  The annual event draws hundreds of revelers to the island each year. The Star News reported that many get to the festivities by hitching rides on boats with people they don’t know and are left stranded on the island after the party, with no way back to the mainland. Last year, nearly 1,500 people came to party, resulting in a handful of drunken fistfights and more than 130 injuries requiring medical attention.

Wilmington Star News reported that David Cignotti, mayor of Wrightsville Beach said:  “It’s important that all the agencies talk and coordinate, and that’s what we’ve attempted to do. . . . Adding additional police protection there will probably help temper some folks and some of their activities. We’re going to be getting out early, because a lot of folks will get picked up on Wrightsville Beach and transported over, and we’re going to crack down on that activity. . . .  To take money and take people over there, you need a business license from the town, and you should not be using our public parks to take people over there.”

If the stepped up preventative efforts fail to alleviate the problems despite the outreach efforts and increased security, state agencies may pursue other control measures. Masonboro.org members have bristled at the possibility of new regulations for reserve sites that could change the way residents are able to use the island, saying that people who visit the shore responsibly shouldn’t be punished for the antics of out-of-towners occurring on one day each year.  Collins Law Firm agrees. “We heard resoundingly from our membership that they felt they shouldn’t be penalized,” Johnson said. “We really are pretty passionate about keeping things the way they are.”

The local paper at Wrightsville Beach, The Lumina News reported that water taxis transporting revelers to Masonboro Island for the Fourth of July will be under increased scrutiny this year as the Wrightsville Beach Police Department hopes to eradicate private individuals from operating illegal water taxis.

The Lumina News reported that in the past, Wrightsville Beach Police Chief Dan House said that “when boaters offer to carry passengers to and from private and public docks around Wrightsville Beach to Masonboro Island in exchange for money it contributes to the issues on both islands . . . [and] that he thinks the situation will be better managed than last year. . . . That bleed-over that we get from Masonboro is what we are trying to shut down. . . . [p]eople come back over here, usually drunk and causing problems so we are going to really focus on the water taxis.”

Wrightsville Beach Town Manager Tim Owens indicated that the Town has not issued any business licenses for water taxis anyone operating a taxi will be in violation of a town ordinance. Also the United States Coast Guard could charge operators in violation with federal law if they don’t have a captain’s license. Chief House reportedly said that his officers did not begin patrolling the docks and actively searching for water taxis until around 11 a.m. after which time many partiers had already been ferried to the island.

Chief House also said that on the Wrightsville Beach strand, he expects more citations for alcohol and glass on the beach to be issued. The Lumina News wrote that Chief House said due to the increased signage indicating the prohibition of glass and other banned substances: “There is no way anyone can walk out on the beach without seeing it,” he said. “If they come from a private residence they could say that but … we are going to be reluctant to uphold any appeals if their excuse is, ‘I didn’t know.’”

Illegal fireworks are also a typical issue for law enforcement to deal with on the Fourth of July evenings. Chief House said that this year his department would be working with officers from the United States Bureau of Alcohol, Tobacco, Firearms and Explosives, and the District Attorney’s office to increase law enforcement to stop the use of such fireworks on the Fourth of July.   The Lumina News reported that Chief House said “Our policy in the past has been to go over there, ask whose fireworks they are and nine times out of 10 nobody claims them so we seize them, because they are illegal, and turn everything over to ATF,” he said. “There are certain areas we know have fireworks on the island that we have had problems with; and we have already spoken with either the homeowners or businesses and let them know … just to give them a fair warning so hopefully it will go better than it has in the past.”

The Fourth of July is America’s Birthday.  On July 4th, 1776, our founding fathers formally executed the Declaration of Independence, which formally declared the revolt and refusal to submit to the abusive exercise of authority of our previous supreme ruler:  Great Britain.  The Declaration of Independence in its conclusion proclaimed:  We, therefore, the Representatives of the united States of America, in General Congress, Assembled, appealing to the Supreme Judge of the world for the rectitude of our intentions, do, in the Name, and by Authority of the good People of these Colonies, solemnly publish and declare, That these united Colonies are, and of Right ought to be Free and Independent States; that they are Absolved from all Allegiance to the British Crown, and that all political connection between them and the State of Great Britain, is and ought to be totally dissolved; and that as Free and Independent States, they have full Power to levy War, conclude Peace, contract Alliances, establish Commerce, and to do all other Acts and Things which Independent States may of right do. And for the support of this Declaration, with a firm reliance on the protection of divine Providence, we mutually pledge to each other our Lives, our Fortunes and our sacred Honor.

Today’s events are part of our country’s celebration of the founding of our country.  Today is the 237th anniversary of the our Declaration of Independence from Great Britain.

In response to the recent reports of dramatically increased efforts by law enforcement and other organizations to put an end to the rowdy celebrations on Masonboro Island during, and presumably more specifically to the threat of imposition of regulations restricting access to the island, Richard Johnson, the founder of Masonboro.org, wrote a letter to the editor of the Wilmington Star News which was published in late June, 2013.  Here is a reprint of Mr. Johnson’s letter the editor:

In the recent article about officials cracking down on the annual island bash, state officials made some key points that could shape public opinion. Unfortunately, these points were just not true. The first one states that the party wreaks havoc on the island … not true. The party takes place on a small spit of land on the north end that represents less than .01 percent of the island. The second point mentions heaps of trash scooped up the next day by Coastal Reserve staff members. For the last three years, Masonboro.org has handed out trash bags and removed trash during the party. When the party is over, the trash is gone. There are no huge piles of trash left behind. Last year over 50 Masonboro.org members – with the help of Waste Management – removed and recycled 4,000 pounds of trash. I am also skeptical about the mention of 130 injuries. Our volunteers only saw a handful of people seeking out medical attention. Most of these were from stepping on oyster shells.  Finally, we take issue with the statement: “This is the last place this type of activity should be occurring.” While we are not a big fan of the party, we are passionate about keeping the island open to the public. The overwhelming majority of the kids over there behave as good citizens. Those who break a law while on the island should be removed and arrested.  When state officials present misleading facts that could shape public opinion against public access, it is an injustice to all the people who use the island responsibly all year long.  By:  Richard Johnson, Wilmington

Collins Law Firm supports the efforts of Masonboro.org, and encourages everyone to behave and party responsibly and safely not only on the Fourth of July, but always.  However, if you or someone you know receive a traffic ticket or get charged with a crime in or around Wilmington, NC in New Hanover County, Brunswick County (Bolivia, NC), or Pender County (Burgaw, NC) call Collins Law Firm at: 910-793-9000

This entry was posted on Thursday, July 4th, 2013 at 2:22 pm and is filed under Legal Advice, Legal News, News. You can follow any responses to this entry through the RSS 2.0 feed. Both comments and pings are currently closed.