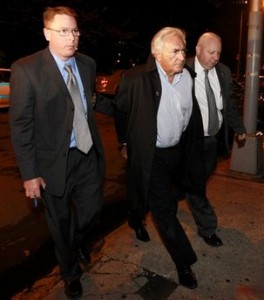 Today’s news headlines are dominated by the weekend arrest of the head of the International Monetary  Fund – Dominique Strauss-Kahn.  He is accused of a violent sexual attack on a hotel maid at the luxury Sofitel hotel, near Times Square, and he is charged with a criminal sex act, attempted rape, and unlawful imprisonment.  This is an extremely high profile case because as a member of France’s Socialist party, Strauss-Kahn had been considered the strongest potential opponent to French President Nicolas Sarkozy, in next year’s election.

Strauss-Kahn was examined by authorities over the weekend for physical evidence that could incriminate him, or which could be exculpatory, in the alleged sexual assault of a hotel maid.  His criminal defense lawyer, or at least one of his attorneys is William Taylor, who said that Strauss-Kahn voluntary submitted to the “forensic examination” requested by prosecutors.  Another criminal defense attorney, Benjamin Brafman, said that Strauss-Kahn “intends to vigorously defend these charges and he denies any wrongdoing.”  Strauss-Kahn was in custody over the weekend at a Harlem precinct where police say the maid identified him from a lineup.  He will have his arraignment in a Manhattan court this Monday, May 16, 2011.

The physical evidence will be very important in this high profile case.  Eye witness testimony has been one of the major sources of wrongful convictions historically.  There are laws in many states proscribing procedures by which eyewitness identification must follow to be admissible in court.  For example North Carolina has the Eyewitness Identification Reform Act codified at § 15A-284.52. This Act requires that:  Before a lineup, the eyewitness shall be instructed that:  “a. The perpetrator might or might not be presented in the lineup, b. The lineup administrator does not know the suspect’s identity, c. The eyewitness should not feel compelled to make an identification, d. It is as important to exclude innocent persons as it is to identify the perpetrator, and e. The investigation will continue whether or not an identification is made. The eyewitness shall acknowledge the receipt of the instructions in writing. If the eyewitness refuses to sign, the lineup administrator shall note the refusal of the eyewitness to sign the acknowledgement and shall also sign the acknowledgement. (4) In a photo lineup, the photograph of the suspect shall be contemporary and, to the extent practicable, shall resemble the suspect’s appearance at the time of the offense. (5) The lineup shall be composed so that the fillers generally resemble the eyewitness’s description of the perpetrator, while ensuring that the suspect does not unduly stand out from the fillers. In addition: a. All fillers selected shall resemble, as much as practicable, the eyewitness’s description of the perpetrator in significant features, including any unique or unusual features. b. At least five fillers shall be included in a photo lineup, in addition to the suspect. c. At least five fillers shall be included in a live lineup, in addition to the suspect. d. If the eyewitness has previously viewed a photo lineup or live lineup in connection with the identification of another person suspected of involvement in the offense, the fillers in the lineup in which the current suspect participates shall be different from the fillers used in any prior lineups. (6) If there are multiple eyewitnesses, the suspect shall be placed in a different position in the lineup or photo array for each eyewitness. (7) In a lineup, no writings or information concerning any previous arrest, indictment, or conviction of the suspect shall be visible or made known to the eyewitness. (8) In a live lineup, any identifying actions, such as speech, gestures, or other movements, shall be performed by all lineup participants. (9) In a live lineup, all lineup participants must be out of view of the eyewitness prior to the lineup. (10) Only one suspect shall be included in a lineup. (11) Nothing shall be said to the eyewitness regarding the suspect’s position in the lineup or regarding anything that might influence the eyewitness’s identification.”

The Strauss-Kahn case will be interesting to follow to see how the physical evidence supports, or contradicts, the eyewitness evidence.

This entry was posted on Monday, May 16th, 2011 at 10:57 am and is filed under Legal News, News. You can follow any responses to this entry through the RSS 2.0 feed. Both comments and pings are currently closed.