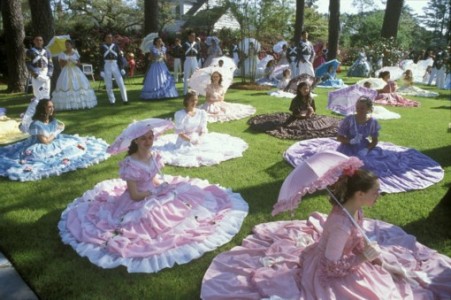 This weekend, April 6-10, 2011, is the 64th Annual North Carolina Azalea Festival in Wilmington, NC, New Hanover County. The Festival is an annual celebration of Wilmington’s gardens and culture.  The festival covers five days of entertainment which includes: a parade, street fair, circus, concerts, pageantry, and all that is Southern. Beginning in 1948, the Festival has blossomed into an extended weekend celebration that attracts more than 250,000 people annually to the region including and surrounding New Hanover County, NC.
This year the festival includes a concert by the Avett Brothers!  The Avett Brothers is a folk rock band from Concord, North Carolina, comprised up of brothers Scott Avett and Seth Avett, who play the banjo and guitar respectively, and Bob Crawford who plays the stand-up bass.  When tickets went on sale for this show, they sold out within days.  The Avett brothers have quite a loyal following, and many people from around the Southeast will be coming to the Azalea Festival for the first time to see the show.
The Festival also includes the 127th annual Cole Bros. Circus of the Stars. The name refers to its dome interior which replicates a celestial nighttime sky. Billed as “the world’s largest circus under the big top,” the circus boasts costumed characters, acrobatics, death-defying stunts and an international cast of entertainers with their trained and exotic animals. However, the circus comes with some controversy.  According to bornfreeusa.org, the Cole Brothers Circus has failed to meet minimal federal standards for the care of animals used in exhibition as established in the Animal Welfare Act (AWA). The United States Department of Agriculture (USDA) has cited Cole Bros. Circus numerous times for failure to provide veterinary care, adequate shelter from the elements, and proper food and water, as well as failure to handle animals in a manner that prevents trauma and harm and ensures public safety.  In past years, protesters have greeted patrons at the entrance of the parking lots with pictures of animal cruelty related to the circus.  This year, the protesters will also likely be back.
While the Azalea Festival is a fun family friendly event, drinking alcohol is part of many of the events, and in the revelry many people will be charged with alcohol related crimes including open container, driving while impaired  or driving under the influence (DWI/DUI), fake i.d. or counterfeit identification, underage drinking, and aiding and abetting these and other crimes.
If you are charged with any type of crime in our area, call Collins Law Firm at 910-793-9000 for a consultation about what we can do for you. In many cases, we are able to negotiate with the charging officer and the district attorney’s office to have a defendant perform volunteer service in order to have the charges dismissed.  Sometimes, that volunteer service can be served on the beach picking up trash, and helping keep our beautiful beaches clean, including Wrightsville Beach, Carolina Beach, Topsail Beach, Wilmington Beach, and Kure Beach.

This entry was posted on Friday, April 8th, 2011 at 7:57 am and is filed under Criminal Defense, DWI/Traffic, Misdemeanors, News. You can follow any responses to this entry through the RSS 2.0 feed. Both comments and pings are currently closed.